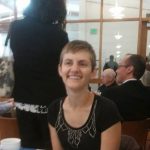 Bachelors of Science in Mathematics and Biology

Update from Cinnamon: I am on track for completion of my junior and senior year, and graduation in Spring 2021.  My Senior Capstone in Mathematics team was able to give our presentation to the Durango-La Plata County Airport Commission. I am signed up for an online chemistry class at the beginning of summer, called “natural products from plants”. The professor has a stellar reputation. He promises me I’ll be building chemical apparatus and conducting experiments in my kitchen. I can’t wait! I am also participating in a graph theory research project with math professor Dr. Laura Scull next year. We’ll be doing actual research into mathematical truths that no one has ever done before. Like a dream come true!

I hope you are well. Please pass along my gratitude the AAUW members for their support – and to Cheryl Jackson, Thank you again for all the lives you’ve touched, and for being the kind of person that inspired this scholarship. It means so much to me. I am quite sure you’ve made the world a brighter place.