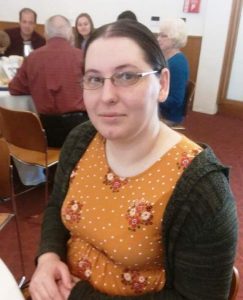 As a non-traditional student, the balance between “real life,” so to speak, and pursuing a college education can be a bit chaotic to juggle, but kind-hearted individuals like yourselves [AAUW] willing to assist students truly helps lighten the load. I’m very excited to jump in and make my dreams a reality. It is through donations such as yours that this becomes possible. I deeply appreciate your willingness to help, and again, thank you so much.

Update 2021: Currently Alicia is with her family in Durango, continuing continuing in her senior year to graduate in May 2021. She is in the graphic design and entrepreneur program.   In addition she’s been using the extra time doing art and practicing new methods with watercolors, comics, and catching up on some photography projects. She has also been trying her hand at learning Japanese.

Brittany Trepanier is completing her sophomore year at Fort Lewis as a non-traditional student. She is originally from Albuquerque and has trained to become a Registered Dental Assistant. She was lucky enough to work in an office in Sydney, Australia and convinced by the office team to return to school. She is currently pursuing a degree in Cellular Molecular Biology to be prepared to take the DAT and be accepted into dental school. from her thank you letter:

“…not only has the scholarship eased the financial strain…I was having a hard time giving 100% in every class and becoming disappointed in my lack of motivation. When I received this award, I felt a wave of confidence and motivation to keep going rush over me.”

Niviaaluk Brandt is an FLC non-traditional student who is finishing her sophomore year at FLC. She is an Inuit from Nome, Alaska – single mother of  3 , one autistic, one with ADHD.  She moved to Durango in June of 2020 after taking her first semester FLC classes online from Alaska. She had attended the University of Alaska at Fairbanks prior to that.

Naviaaluk has an impressive goal of medical school – specializing in work with people on the autism spectrum & others with addiction & intends to set up programs based in traditional healing in Nome.  Her volunteer life in her field of study in addition to parenting and schooling is impressive.