Born and raised in the Midwest, Illinois, I chose to attend Fort Lewis College where my childhood hero, also my aunt, worked. After graduation, I taught physical education and health while also coaching athletics at Monte Vista Public Schools. In 1986, I split my time between graduate school and coaching women’s volleyball at Fort Lewis. After a full and fulfilling career there, finishing my last years as Assistant Professor of Exercise Science and Gender & Women’s Studies, I retired in 2013. I like to call it the best promotion of my life; I retired to be a “stay-at-home” daughter for my Mother. That was a nourishing and inspiring role that helped me transition into doing, today, the things that meet me at my heart: AAUW that is committed to the education of women; and Caregiver Outreach, St. Marks that supports my need to acknowledge the beauty and necessity of caregiving. I am completely honored to serve AAUW-Durango as its president and look forward with the officers and members to furthering our mission and goals. 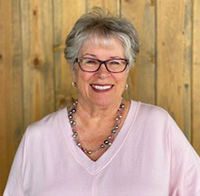 I was born and raised in Northern California.  I earned a Bachelor’s Degree in Accounting from California State University, Chico and then a Masters in International Business Studies from the University of South Carolina.  I joined Price Waterhouse (now PricewaterhouseCoopers or PwC) in 1988, working and living in many locations including Houston, Kazakhstan and Russia before landing back in San Francisco.  While in San Francisco with PwC I served for 10 years on the board of  Professional Business Women of California (PBWC), a non-profit founded in 1989 by Congresswoman Jackie Speier to advance the role of women in the workplace.  I retired from PwC in 2015 and settled in Durango in 2019. 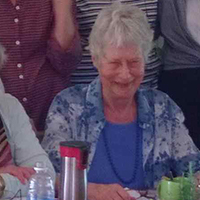 I was born and raised on a farm in The Netherlands. For the first six grades I attended a one-room school house and then passed the entry exam for a college-preparatory high school in a nearby city. Upon graduation thereof, studied at/graduated from the Schoevers College in Amsterdam and subsequently worked for an Import Company as the Assistant to the Director. During that time I had the opportunity of traveling to various European countries.

Married in 1960 and came with my husband to Washington, DC where I worked for an Airline company until our twins were born and I became a stay-at-home Mom. After having lived in Bethesda, Md. and Wyomissing, Pa., my husband was transferred to the Houston, TX area in 1977. Here I became a student once again and graduated in 1982 from the Sam Houston State University, Huntsville, TX with an accounting degree and also obtained my CPA certificate.

After having worked for the Getty Oil office in Houston (later taken over by Texaco) in the various accounting departments I retired in 1997 and with my husband moved to this wonderful place called Durango. Became a member of several organizations and joined AAUW in 2004. This association attracted me in particular because of its support and encouragement to students as well as assisting women in various ways to accomplish their goals. I have been Branch Treasurer since 2012. I grew up near Pojoaque, New Mexico, and attended The New Mexico School of Mines, majoring in mathematics and meeting my husband there. I also received a Master’s Degree in Math Education from Western New Mexico University. With my husband being a mining/metallurgical engineer, we have lived in five western states. In each state I found a teaching job, whether it be teaching reading to middle schoolers or math to high schoolers or developmental math to college students. In all I taught 34 years before I retired in 2014 from Pikes Peak Community College. I belonged to AAUW in Colorado Springs for several years before we moved to Durango in 2018 and was a ‘Names Honored Recipient.’ 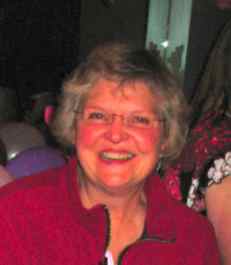 Kathleen has a BS in Nursing and has worked and volunteered in the medical field for years. She founded a non-profit disease association in 1993, now international, based on the undiagnosed chronic illness of one of her children, Cyclic Vomiting Syndrome – a migraine variant. She continues to administer the association and function as the research liaison to the medical team. Her community involvement is broad based and lends itself to her inherent drive to network. She is a board member of the Community Foundation Serving SW Colorado, on the leadership core of the League of Women Voters – La Plata and actively involved in the work of the La Plata County Democrats. She is an active member of the Unitarian Universalist Association from the national to the local level. Kathleen is widowed but surrounded by the six children and grandchildren who have grown up in her blended family. The family thrives on pushing boundaries and living out their values. 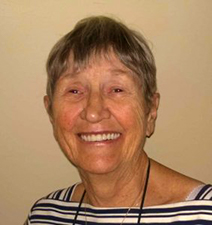 Born in Minnesota and raised in Minneapolis, I received my BA in Mathematics, Magna cum Laude, from the University of Minnesota in 1958. My computer programming career began at Martin Marietta in Denver and continued at Honeywell in Phoenix, Blue Cross in Boston, and Pillsbury in Minneapolis. I changed my goals and in 1992 I received my MSW at Boston College and worked at a shelter for battered women, gratifying but difficult work. Durango became my home eleven years ago when I chose to be close to my daughter and her family. I joined AAUW when I moved here so as to meet women with common goals; it proved to be a wise decision. 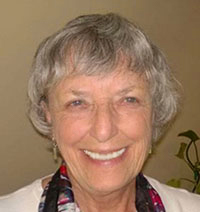 Faye was born and raised in rural Wyoming. She earned a B.S. and M.S. in Microbiology from the University of Wyoming, then spent two years in the Peace Corps in Guatemala. After the Peace Corps she worked as a research technician, then went back to school and earned a Ph.D. in Immunology and Infectious Disease from the University of Pennsylvania. Her research and academic career included positions at New York University Medical School, Harvard School of Public Health, and Smith College. At Smith, in addition to teaching, she worked with the Project on Women and Social Change to study gender issues in science. She served as a consultant on the development of new contraceptive methods for women for the World Health Organization, and was the U.S. liaison to WHO’s Gender Advisory Panel. Throughout her professional career she advised, consulted, worked on, and advocated for gender equality and reproductive rights.
Faye moved to Durango in 2003. She supports the Women’s Resource Center where she sits on WRC’s scholarship committee. She also is a member of the Board of Ethics for Mercy Regional Medical Center. She is proud to be a member of AAUW, whose mission to support women in achieving their goals aligns with hers. As Public Policy Liaison, she will bring to the membership information on issues of today that affect women, and provide means of advocacy. 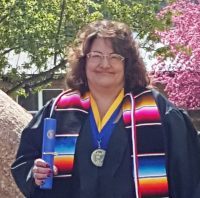 I graduated cum laude from Fort Lewis College in April 2016 with a BA in Sociology with a Psychology minor. I was a very non-traditional student not beginning college until I was 43. At that time I was a single mom of two young adults. The cost of my education and living expenses were always a strain. During my senior year at FLC, I was awarded a scholarship from AAUW– The Virginia Schoser Scholarship. It was a great help to me as well as a little poignant. You see, as a fifth generation Durango native, I spent lots of time with my grandparents , great-grandparents and even great-great-grandparents. I had 6 grandmothers and 5 grandfathers when I was born; and they all lived in Durango. My moms grandmother (my sweet grandma Judy) was actually friends with Virginia Schoser and I remember meeting her as a child. I was touched to be awarded her scholarship. I am glad to be able to give back to AAUW and serve on this Board. I grew up in southern New Jersey, across the Delaware River from Philadelphia. I attended Earlham College, earning a degree in Far Eastern History. A foreign study experience took me to Japan, where I stayed  with the family of a girl who had lived as an exchange student with my family for a year. I have returned to Japan twice since, once on a national fellowship to work with Japanese not-for-profits. Later I earned a Master’s Degree from the State University of New York.

My first work experience was interviewing teen mothers about their substance use during pregnancy.  I developed a deep respect for their resilience and sense of responsibility during their pregnancies. I continued to work with women’s issues: reproductive health, domestic violence, and teen motherhood. And finally, I was able to make clear the relationship between women’s issues and substance abuse; I became the coordinator of a coalition that brought a diverse urban community to understand how substance abuse affects everyone. For this work, the local NAACP awarded me the honor of “Woman of the Year”. Kathy was born in Indianapolis, Indiana.  She earned a Ph.D. from University of Illinois, Urbana-Champaign; and a BA, from DePauw University.  Kathy assumed the rank of Professor Emeritus of Anthropology and Gender & Women’s Studies after teaching for 34 years at Fort Lewis College and serving twice as Chair of the Department of Anthropology and three times as Coordinator of the Gender & Women’s Studies (now Gender & Sexuality Studies) program. She also served as faculty affiliate for the FLC Native American & Indigenous Studies program, and in 2005 received a second Fulbright grant to teach in the Anthropology & Culture MA program at the Salesian Polytechnic University in Quito, Ecuador.  She has published several book reviews, book chapters, and journal articles.

I was raised in a military family and moved around the world. I graduated from high school in Japan (Go Vikings!)  I have lived in Colorado for the past thirty years.  My teaching career began as an instructor for fifteen years at the University of Colorado, Colorado Springs, and have taught at Fort Lewis College for the past five years.  My fields of study are Sociology and Gerontology.  I have two young women as my children, three grandchildren, two dogs, two cats and a handsome husband.