We are working hard to fund a very important addition to our scholarship opportunities for women at Fort Lewis College.   Be on the lookout for fundraising events in the future including the Holiday Un-Party and the Book and Author Luncheon.  We always accept donations to the Sandy Brown Scholarship Fund. 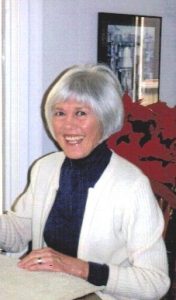 Sandy Brown came to Durango from Denver in 1969 after working as a speech therapist for Cherry Creek Schools. ‘Volunteer’ became her middle name. In addition to AAUW leadership, there was Planned Parenthood, First United Methodist Church, United Way and the Dental Health Puppet Show for children. To balance her life, Sandy continues to be an avid runner having competed in a number of marathons – including the Boston Marathon.

Sandy, now a lifetime member, joined AAUW in 1969. Inspired by President Jeanne Willeto, she served as President 1978-80 and 1982-83.  In 1974, President Sandra Mapel, asked Sandy to be scholarship chair which resulted in the first Fort Lewis College (FLC) AAUW Virginia Schoser Scholarship. Initiated when Virginia was still living, the Schoser scholarship was endowed in 2006 thanks to the gift of the Schoser Estate for education.

In 2009 Sandy worked with member Janet Watson’s daughters to create the Watson Scholarship. It was quickly endowed in 2012 due to the Watson daughters’ contributions. The Cheryl Jackson Scholarship, started in 2012 was fully funded by AAUW members and awarded in 2019.

Sandy served as AAUW Scholarship Chair for 42 years establishing a solid relationship with FLC. Equally important she set the tone for the same warm connections with non-traditional scholarship recipients over the years.

AAUW is proud to call Sandy Brown a lifetime member who continues to bring her dedication for excellence to our mission. The current membership is dedicated to working toward the AAUW Sandy Brown Scholarship in her honor – the 4th AAUW Scholarship.  Certainly, no one could deserve this legacy any more than our beloved Sandy Brown.